The GO|STAY|KIT® was founded in 2009. Initially called “The Ready Book,” we changed the name to something specifically suited to its actual use, both as an Evacuation “Go” Kit and an Emergency “Stay” Kit. Instead of being generally “Ready” for anything.

The Rogue Valley Council of Governments and [amalgamated design concern llc] are a public/private partnership with 20% of all GO|STAY|KIT® earnings going to support those with access and functional needs.

The idea behind the Kit began many years ago in Grants Pass, Oregon, after a disastrous fire in a convalescent care facility. The residents were quickly moved to another location, and thankfully no one was hurt. But their patient records, along with computers, file cabinets etc., all went up in flames. No one at the receiving location had any medical information about these “new” patients… until much later.

This incident was a watershed event for those involved. They realized that a Kit, which contained important patient information and other pertinent data—that one could quickly grab & go—was necessary in case of a medical emergency or natural disaster. A team of emergency preparedness specialists was then assembled, and after receiving input from caregivers, facility operators, and emergency responders, the GO|STAY|KIT® was born.

The Kit is printed & hand assembled in the U.S.A. in both English & Spanish. Its printed on waterproof paper, and is 100% recyclable-with a recycle rating of [5]

The GO|STAY|KIT® was created by the Jackson and Josephine Counties, Oregon, Vulnerable Populations Committee. 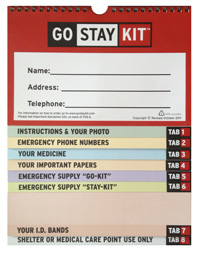